A breakup is hard, plain and simple. How you handle moving forward can define your strength of character.

There is significant benefit you can draw from the Stoic philosophy and applying the lessons for moving through a difficult breakup. 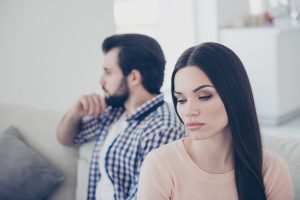 “What benefit is there in reviewing past sufferings, and in being unhappy, just because once you were unhappy? … Two elements must, therefore, be rooted out once for all — the fear of future suffering, and the recollection of past suffering; since the latter no longer concerns me, and the former concerns me not yet.” (Letters to Lucilius, LXXVIII. On the Healing Power of the Mind, 14)

Which allows me to briefly discuss a common objection to Stoicism: yes, it is all well and good that I know something at a rational level, but it is an altogether different thing to internalize that same notion.

If your relationship ended, whether by choice or by surprise, from a Stoic perspective, you shouldn’t dwell on something that is now gone. And yet, your feelings of sadness and regret keep haunting you. So what’s the point of Stoicism, then?

Many of us have gone through a difficult breakup, of course, and the difficulty always exists between the cognitive understanding of something and the ability to take control of our emotions to let go of that thing is why Stoicism is 90% practice, not just theory.

As Epictetus puts it: “If you didn’t learn these things in order to demonstrate them in practice, what did you learn them for?” (Discourses I, 29.35)

But how, exactly, does one practice Stoicism? Epictetus again:

“If from the moment they get up in the morning they adhere to their ideals, eating and bathing like a person of integrity, putting their principles into practice in every situation they face — the way a runner does when he applies the principles of running, or a singer those of musicianship — that is where you will see true progress embodied, and find someone who has not wasted their time making the journey here from home.” (Discourses I, 4.20)

Specifically, in a lot of cases, including a difficult breakup, I suggest a combination of the following:

But there is also a positive aspect to the Stoic advice. While regret and sadness for actions you can no longer redress is a waste of time and emotional energy, carefully and dispassionately reflecting on what happened in order to learn from it is a very good use of your time. This is the process of becoming self-aware and growing as a man. 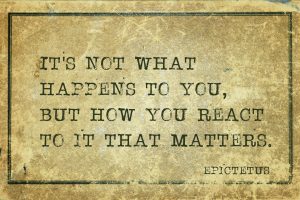 Think carefully about how you may avoid repeating those mistakes in the future. If you were blindsided remember, life can be a fickle mistress: one day you are at the top, the following one you feel miserable. Your only defence against that is to cultivate your positive mindset, in love as with anything else: appreciate what you have when you have it, let it go when the universe takes it back.

Finally, understand there is more than one person out there for all of us. You can and will find someone else to share the intimate aspects of your life. A breakup is not a death sentence.  Get back out there. There are plenty of wonderful people in the world, and life is better when we are with one of them.

8 thoughts on “If a breakup has you down – rethink it”