To build a winning team there are few key elements and processes you need to examine and undertake. Developing a crew of pipe hitters that  seem to do nothing else but succeed, borders on the realm of black magic BUT when you apply this formula, your chances of success are multiplied exponentially.

Rather than trying to conjure some elusive  “magic”, let’s apply some science instead. 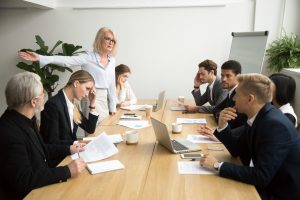 What makes a collection of random individuals a “winning team”? How can one assortment of people be so successful and another such an utter failure? Is there any way to predict the outcome of a team-up, or a way to quantify the success of one team composition versus another?

The truth is that there is no “one size fits all” approach to team-building. Every team and every situation is utterly unique, so you can’t truly predict how the collection of unique individuals will react and respond to each other.

But, what you can do is understand the science behind a winning team. As one psychologist explained, there are five critical components to make a team successful:

Scientists have quantified something called “sensitivity to initial conditions”. Basically, when people come together to accomplish a task, the emotional climate established within the first few minutes of the encounter tends to persist.

Over time, that emotional climate becomes nearly impossible to change—for better or for worse! The personalities of the founders tend to affect the culture of the team, and the effects can linger long after the founders have left.

What this means is that how your team BEGINS their work together is of the utmost importance! It’s about more than just having a common goal you can all get behind—it’s about establishing the right emotional climate from the beginning.

For any team that I have been either a part of or lead, this means establishing a craftsman like approach to the work at hand.

It doesn’t matter who your team was before they walked into that room for the first time; what matters is what you all do now that you’re in the room. If you establish a climate of hostility, arrogance, superiority, or belittling, that’s how the team will function.

If your climate is one of cooperation, honesty, integrity, and willingness, that emotional climate will persist and it has been my experience in both the public sector and now the private sector, that this type of climate produces success (there’s the magic for ya! )

Make sure your team starts off on the right foot, and get people working together from the beginning! The saying “Well begun is half-done” becomes all the more important now that you realize the truth of “sensitivity to initial conditions”.

Surprisingly, these are GOOD things to have in a team! If you have too many like-minded individuals, you may find that your project runs aground or goes off the rails because everyone was pushing in one direction—potentially the wrong direction.

By including conflict and having differences of opinion, you ensure that the project is questioned enough from every conceivable angle that you can KNOW you’re making the right choices.

Groupthink is one of the quickest paths to failure, and you need everyone to think independently of each other in order to make sure all potential avenues are being explored. In a homicide investigation, there is a specific role called “the contrarian”. This individual should be responsible for developing alternate theories, challenging the findings of the investigators and encouraging broader thought processes throughout the investigation. History has repeatedly shown us what happens when power runs unchecked.

Conflict helps to ensure that people are questioning, analyzing, challenging, and pushing to change as much as needed.

That’s not to say that conflict is great for a team—it can derail any project quickly—but a bit of well-controlled, properly managed conflict can help us to learn, see with new eyes, approach projects from a new angle, and adjust to improve.

And without cooperation, you’re never going to succeed. If every one of you is pulling your own way or trying to wrest power or control from the others, the team is doomed to fail. It’s only when you’re all on board and pulling in the same direction that things actually get accomplished.

The treatment of teammates leads to psychological safety, a “shared belief held by members of a team that the team is safe for interpersonal risk-taking’’ and ‘‘will not embarrass, reject or punish someone for speaking up.’’

Basically, a team built around a spirit of cooperation leaves to a feeling of safety where everyone is secure in the knowledge that their suggestions and advice will be respected, and that they’ll be respected for who they are and what they have to offer. This spirit leads to a thriving team!

Let’s get real: conflicts are always going to arise, no matter how unified a team is. When that happens, the one thing that will get the team through the conflict is a “buffer of positive emotions”.

Think about your best friend: you’ve probably argued with them a hundred times, yet you don’t hate or resent them. That conflict is just a part of your friendship, and the positive emotions—friendship, love, trust, and respect—helps get you through the argument and out the other side stronger for it.

That’s what you need to make your team work!

Too much negativity can drag a team down, so it’s imperative that you have more positive encounters than negative—a ratio of 3.5:1 at least. That way, all those positive emotions stored in your emotional and memory “bank” will get you through the conflicts without being dragged down by the negative.

A common phrase in special operations is “Adapt and Overcome”  and science has proven that it’s not the strongest or smartest species that survive in nature, it’s the most adaptable.

Our environments change, our circumstances chance, even sometimes our ultimate goals change. If we don’t change with them, we’re doomed to fail.

Adaptability is one of the most crucial tools in your personal and professional arsenal, and it’s critical for a team to function. As long as we can shift our focus according to the changes to our environment and circumstances, our chances of succeeding at our long-term goals are much higher. The moment you stop changing with the times, that’s the day you start down the path to failure—both as a person and as part of a larger team unit.

YouTube Videos
How to do Core Finishers
Recent Blog Posts