Having the ability to stay mentally strong during a crisis will enable you to reach a successful outcome and possibly even save your life or the lives of those around you.

Everyone faces crises at some point in their lives!

From financial emergencies to crazy deadlines to sudden personnel losses to personal hardships—crises are all but guaranteed in this life we lead.

When you respond from a place of mental strength, you can separate yourself from those who are simply average and standing in the way of success.

When you are in a leadership position it doesn’t mean a crisis doesn’t hit you hard; it’s called a crisis, after all!

But true leaders who are the master’s of their craft, are able to stay calm, focused, and mentally strong in the times of crisis.

It’s that mental strength that makes a leader a leader! Being able to stay in control—of themselves first and foremost, and ultimately the situation—will bring a great leader through any crisis ahead of the game.

Not sure how you can stay mentally strong in times of crisis? Here are the steps to handling whatever life throws at you:

Step 1: Face the truth. No matter how much you want to fight it, there’s no denying that the situation has gotten out of control, and you are in a time of crisis. Avoiding, ignoring, or resisting the truth is just going to make things harder. Time to face up and admit that yes, the situation’s dire and you’re facing a tough time ahead.

No, you don’t need to agree with everything that happened, or all that has led you here to this moment of crisis. But as long as you acknowledge that it’s happening, it’ll be much easier to buckle down and deal with the situation.

At the cornerstone of this mindset during a crisis, or anything for that matter, is the stoic philosophy. Many of us want to place blame and responsibility on external objects because it’s easy to do, but the truth remains that all conflicts start internally, in our minds.

When we do not face the truth of the situation there can be no resolution.

Step 2: Get rid of the “poor me’s”. That goes for the “why me’s?” as well! Every second you spend in self-pity or questioning the “fairness” of the universe is a second wasted. This is perhaps the least attractive human quality any of us can possess.

A leader doesn’t worry about all the whys and wherefores behind everything—they push those aside until after the crisis is dealt with, and instead get on with the business of dealing with the problem.

Own it, face it, change it.

Step 3: Get help. The #1 mistake that many inexperienced leaders make is trying to deal with a crisis situation on their own. 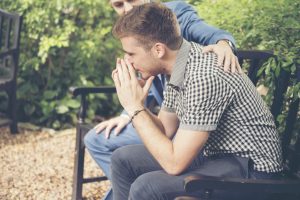 Yes, you may be the one that has to lead your team through the crisis, but no one says you have to tackle the problem or shoulder the burden alone. If you have built a good team, or good relationships, deploy the strengths of others to rise above the problem you are facing.

Asking for help—from your team members, from a fellow leader, or even from someone above you or a mentor—can be the best way to solve any problem.

Not only are you bringing in extra hands to carry the load, but you will get far more perspectives on the situation. You may find those additional minds think of things you’d never have come up with, and those extra eyes will see new solutions to the problem.

ALWAYS ask for help whether in a crisis or not! A good leader knows when they are out of their depth, and goes to the people who can help them tackle the problem.

If you’re going to handle the crisis, you need to identify what’s causing the problem in the first place. It might be you… and if you are the bottleneck to a solution, be sure have the mental strength of character to know when to get out of the way.

The old adage “Know thy enemy” stands very true in every aspect of your life!

Step 5: Get everyone on board. This plays right in with #3, but it goes beyond just asking for help. Instead, it’s making sure that everyone is working together to solve the problem. The REAL problem, the one you previously identified. Once people know what is causing the issue, it’ll be much easier to strive together to solve it. 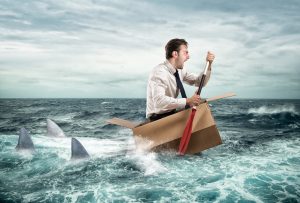 And remember, a team united is far more effective than one man or woman working alone! You’re all working in the trenches together, facing the same crisis. If you can all pull together to find the best solution to your problem, you’ll emerge on the other side of the situation far stronger and more united as a team.

Step 6: Prioritize. In times of crisis, it can often feel like everything needs to get done RIGHT NOW. With so much going on and so many things in the air, you may feel like you’re spinning a thousand different plates that will drop if you stop focusing on any of them.

But running around like a headless chicken isn’t going to get you anywhere! You’re just going to burn out faster that way, far before the crisis is solved.

Instead, take a moment to step back from the feelings of “ohmygodeverythingishappeningnow!” and slow things down. Breathe, analyze the situation, and lay out the steps to best handle the problem you’ve identified. Make a list of priorities to accomplish first, and start working on those.

You may feel like you’re failing when you ONLY accomplish certain items on the list, but once you’ve determined the best plan for getting out of the crisis situation, it’s critical that you follow it. Focus on one thing at a time, and do what’s most important first. You may just find the rest will fall into place!

Step 7: Small steps at a time! When in the middle of a crisis, you may feel like everything’s crumbling around you, and you’re so far in the weeds you’ll never get out.

To stay mentally strong, you’ve got to focus on one small step at a time. Just focus on the task at hand, that one thing you’re doing to pull your team back from the brink. Concentrating on that single task will help you to avoid distractions and anxieties, and you’ll find your mind is far stronger when it’s dealing with one thing at a time.

It’s those small steps that lead to big progress, and it’s much easier to focus on just one thing, one small task, instead of worrying about the big picture.

It doesn’t matter if you are facing a small problem or a major life crisis.  The way you respond begins with the simple step of understanding you don’t control it, but rather you control your own actions and how you respond.

Plan small steps to move you forward toward a resolution, use those around you to assist and conquer anything!

8 thoughts on “How To Stay Mentally Strong During Any Crisis”