The concept of Schadenfreude is concept deeply woven into the culture of policing and special operations as well as corporate and political cultures.

During my 20’s, I had just left the military to actively pursue a career in policing.

A friend of mine was a high level undercover operator in our national police force, and he knew I was in the process of getting hired on a police department.

One evening during a few beers he gave me a piece of advice, or in fact a friendly warning, which would resonate with me throughout my career.

He said, “ You’ll never get tired of chasing bad guys, it’s the internal politics that has the potential to kill you.”

This is true of many organizations but particularly so in public service.

That good idea you have that gets squashed for reasons that defy logic or the promotion of an individual who seems barely competent… politics!

When you are a young person full of piss and vinegar on the outside looking in these kind of considerations tend to take a back seat to the pursuit of your goals.

You have limited context, and you feel confident these kind of things affect others… you’re better than that.

How is it possible that a group of people working toward a common goal of serving their fellow man be anything but rewarding, every minute of every day.

Of course that is the ignorance and arrogance of inexperience.

People are in fact just that…people. 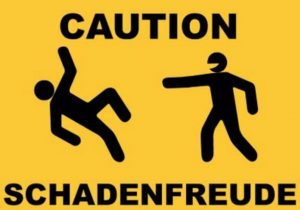 They feel threatened, have unresolved issues with their own egos and will take any opportunity to boost self-affirmation and make themselves feel better.

Sometimes this means taking enjoyment in the downfall of others…

Let’s take a look at exactly what this all means so you can make sure you are living in a way that is contributing to the success of those around you.

Schadenfreude comes from the two German words, Schaden and Freude, harm and joy.

There is no single word in the english language that has the same meaning as schadenfreude.

Think this over for a second.

A co-worker or someone you know appears to have it all together. They are on the rise in the corporate environment, or their financial fortune.

A decision they make or action they take suddenly causes them to falter… secretly you feel a sense of enjoyment. You enjoy seeing them get taken down a notch or two.

“If somebody enjoys the misfortune of others, then there’s something in that misfortune that is good for the person,” said study researcher Wilco W. van Dijk, adding that it could be due to thinking the other person deserves the misfortune, and so becoming less envious of them or feeling better about one’s self.

Listen, I will be the first to admit that I have felt this emotion. Selfishly, it meant that an opportunity that wasn’t there earlier may now exist.

I’ve felt ashamed for feeling this way, but I also realize  that this is normal.

If you have served or worked in an organization where regardless of your efforts in comparison to your counterpart, the compensation and benefits are the same regardless of the effort put forth, it can be a breeding ground for schadenfreude unless the leadership steps up to hold people accountable.

There is an important point of distinction related to the concept of schadenfreude that turns a normal emotion into something more deviant and destructive.

However, those who are self-affirmed are less likely to experience this sensation than those with low-self esteem.

The real heroes, will offer a shoulder or assistance. They will feel compassion and empathy. They possess the ability to ask the question of themselves… What if this happened to me.

We see this most prevalent today in the media and politics… for good reason. Neuroscientists and Psychologists quickly realized there is a chemical response that occurs in the brain no different than when drugs are alcohol are used. The release of dopamine.

When we see a scenario in which others around us fail, we get a feel good “fix”.

This is why media stories, news agencies, political strategists all run stories and create scenarios that elicit an emotion no different than if you were taking a drug.

Subconsciously you stay engaged until the next hit.

A politician you don’t like gets in trouble for a dumb statement…you feel good… on a chemical level!

In my view, if left unchecked or without balance it can represent the worst in us.

If not held accountable, there are those who will go to any length to contribute in whatever ways possible to see that the person who has faltered continues to suffer.

They will provide false facts to the media, spread false rumours and blatantly lie. I’ve witnessed it all.

The media can portray our society and communities,  our elected leaders and political parties in a negative way.

With the competitive market for your eyeballs and the need to sell advertising, creating a chemical response to keep you watching formulates an important part of their overall strategy.

Yet, you are at choice.

While a certain scenario may make bring you a momentary feeling of pleasure never forget the human side which also has compassion and empathy for the misfortune of others.

While you may not like your elected leader, ask yourself if it is in the best interest of your country that they fail.

You might like seeing a coworker get taken down a notch… do you have the ability to put yourself in their shoes?

Can you be a bigger person and offer that shoulder or some much need counsel and guidance?

We aren’t going to change some things about human physiology but what we can do is create balance.

There are some things I would change in my professional life.

Instead of in my early years standing idly by I would hold myself more accountable and those around me.

I would have ensured that when oaths are taken, that they mean something, and the people who spoke the words, lived by them.

It is typical to become more comfortable with this later your career, as you begin developing as a leader.

Don’t let the negative impact of schadenfreude occur without balancing it with what makes us succeed as human race. Empathy and Compassion.

2 thoughts on “Schadenfreude – Your brain on hate”