Your dog is an amazing animal capable of learning of some very impressive skills.

There are very few things more primal than tracking another human being.

The ability to track a bad guy who has committed a crime from a scene to where he is hiding takes thousands of hours of training.

But it’s worth it.

My favorite tracks were those from a domestic assault where some clown assaulted his wife or girlfriend and had run from the scene.

Domestic assault suspects often didn’t run too far, but as a K9 team it’s up to you to track them and ensure they are taken into custody.

These are high risk calls because of the likelihood the suspect would return and commit additional assaults.

Equally important is the ability for you as a team to locate physical evidence. Whether it has been dropped by the bad guy fleeing from a scene or hidden in an area. 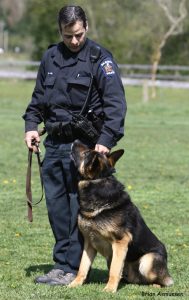 My dog worked hard to locate evidence… he loved the game. His most important find, was a roll of tape used in a homicide.

The murder suspects had fled the bloody scene at an upscale beachfront home.

But they dropped a roll of tape while running to their getaway vehicle stashed no too far away.

While tracking these guys my partner Rogue suddenly downed (went into the down or platz position) on the track. Between his feet was a roll of silver duct tape.

That evidence turned the case because it had the murderer’s DNA on it.

Now maybe you aren’t tracking bad guys and you don’t have the need to locate evidence from a crime scene but you can still teach your dog to search and locate things, perhaps just as a fun game.

Your dog should have something that it absolutely loves as a reward… It can be food or a ball or a tug.

This generally means that your dog has a high prey drive. They get excited by things that mimic prey in the wild (ie a ball or tug) and enjoy it as a reward.

When a dog is satisfied by the reward it makes teaching these skills much easier. As you improve and learn the game can evolve in complexity and become much more challenging. You can do it in the house or in your yard it doesn’t matter.

The critical piece here is teaching your dog to search with its nose as opposed to its eyes.

It’s believed a dog’s sense of smell is more than 2000 times more powerful than a human’s depending on the source of information you choose.

But dogs still rely on visuals, especially in familiar environments such as your home. Search games can help your dog hone in on their natural talents, and it’s a easy way to keep them entertained.

The benefits of nose work for dogs include:

With the search command, you’re using their natural talent in a constructive way to keep them mentally stimulated. The “find it” or “seek” command can be one of the most versatile and fun games you can teach you dog.

The command we used was “search lost” for evidence as we had different commands for searching out humans.  The evidence search required that the dog locate and indicate the evidence but not to interact with it by mouthing it or pawing at it… this was to ensure the preservation of DNA or fingerprint evidence on the item. This level of discipline is probably not necessary for you.

Dogs have been bred to work alongside us; teaching them to use their natural talent of smell 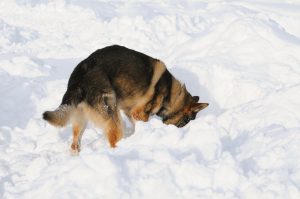 keeps them happy and entertained. It gives them a feeling of purpose. Dogs thrive when they feel like they have a job to do; and it’s even better when it’s something as simple as teaching them to sniff things out for you.

Give your dog a purpose by teaching him to sniff things out for you; dogs thrive when they’re given a job

Your dog should have a solid stay command and recall as a basic level of obedience. Otherwise you will find yourself with a complexity of challenges when trying to implement this new skill.

To start the game have your dog stay at a given location. While he’s watching you go place a bit of food or his favorite toy at the other end of the room.

When you give the cue to release your dog tell him to “find it.” After a few repetitions he’ll know what you’re expecting him to do.

Once your dog seems to know “find it” you can step it up a notch. While your dog is in the stay position put the treat or toy out of his line of sight.

The idea with this search activity is to gradually build up to new distances and areas. When first starting out keep the game centered in one or two rooms.  If you’re confident that your dog knows the “find it” command it’s time to move onto the next step.

Increase the difficulty by hiding the toy slightly. Follow the same steps as above. Show your dog the toy in your hand, leave the dog, and go out to place the toy several yards away or in a different room in the house.

If you are outside place the toy next to a bush, or in a clump of grass, or next to the corner of a building or other object in your yard…any place that is a direct line from your dog to the toy, but where the dog cannot immediately see the toy from where he/she is sitting.

Give your search command and let your dog locate the toy.

**Pro Tip – If your dog locates the item and runs away with it, don’t chase him. You run the other way. If you have a good bond with your dog, his desire to locate you will be greater than that he is getting from a toy… never chase your dog because it becomes a game for them.**

If the dog has trouble finding the toy, then start over with a slightly easier “hide”. Make very sure the dog was watching you when you placed the toy. 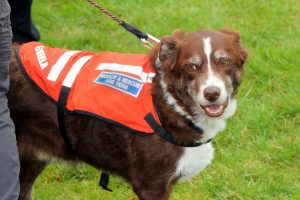 As your dog progresses, you can make the hides more and more complex. Increase the distance or the difficulty, but not both at the same time. Take it slow and try to ensure your dog is successful and having fun. Always praise your dog enthusiastically every time he/she locates the toy back to you. You can reward the work with some play such as throwing the toy or tug.

As the hides become harder for your dog, you must learn how the wind affects your dog’s success… ie. the scent cone.

The dog, who is by now using its nose to locate the toy, must rely on the wind to bring the scent of the toy in his direction. Ideally, you want to be downwind (the wind should be in your face when you look in the direction of the hidden toy) of the toy when you send your dog to find it.

You will be able to “read” your dog when you observe body language which indicates they have located the scent of the toy and the toy itself. Things such as head snaps, coning of their ears and working the scent cone back and forth to the source of the odour.

Finally you can have someone else hide the toy while you wait with your dog. Make sure the dog understands this new aspect to the game by decreasing the difficulty of the hide for the first few tries.

Eventually you will can work your dog with just the command. You will get to an area you want to search, put your dog in a down position and give him the command to search, whatever you choose that to be.

For this to work, the dog must understand the command to search and must believe that when you give the command that something is indeed out there for him/her to find. You must also understand and use the wind. Always send your dog to find the toy from a location downwind of the hide.

Air movement, terrain and temperature all affect scent molecules.  They influence how the scent travels and how long it remains viable.

Your dog is actually not only indicating the presence of scent but they are actually noting the difference in the odour of an object in relation to the area they are searching. 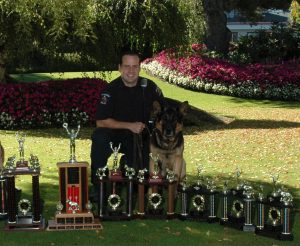 Most dogs will be able to learn this skill if it’s something you are interested in teaching them.