Choke Out techniques have their history dating back to Ancient Greece when Heracles battled the great Nemean Lion. The lion’s skin was impenetrable by the weapons of man but was ultimately defeated when Heracles choked him out with his bare hands.

Fast forward to modern day where choke out techniques are deployed in a variety of arenas. Whether it is silently eliminating the enemy in the battlefield, the MMA octagon or the streets being kept safe by Law Enforcement.

The truth is the most common choke out technique is not a choke at all. This has simply become the common phrase used to describe what happens to your opponent.

Choking actually refers to the restriction of air to the lungs.

An air choke or tracheal choke specifically refers to a “true” choke that compresses the upper airway (trachea, larynx or laryngopharynx), hence interfering with breathing, and leading to asphyxia.

Although less effective at inducing unconsciousness than its vascular counterpart, the air choke causes excruciating pain and air hunger, and in combat sports a fighter will usually submit to such a submission hold.

The more common choke out technique is actually a vascular choke which constricts the carotid arteries and prevents blood from flowing to your opponents brain.

In my view this type of technique is far more effective and poses the lowest amount of risk.  As I have mentioned in many other articles and discussions, the application of force must be proportionate to the threat you encounter.

If you incorrectly apply an air choke there is a high probability that you will crush the trachea of your attacker and contingent on the threat you are facing, there is a very real possibility you could inadvertently kill your opponent.

Justified or not, if you go down that road you are in for a lengthy and expensive legal battle.

This is why we focus on the much safer and more effective vascular choke out technique. Which as actually called strangling.  You should know the difference between the two however for the purpose of this article I will refer to the move as a choke or restraint.

As I already mentioned, the vascular choke out technique restricts blood flow and it works within 3-10 seconds.

Listen, there are no tough guys when it comes to a choke. The physiology of the human body is such that when your brain doesn’t have blood… you go to sleep.

This was the case a while back when I was deployed with 3 other tactical guys as part of a Gang Task Force.

A few weeks earlier there had been a homicide at a local bar and a rival gang vowed revenge.

As a result we were tasked with walking the bars every night checking for known gang members.

As we made our way upstairs at one particular location we rounded a corner right in the middle of a full on donny-brook.

If you read my previous article on defence agains a haymaker, you probably guessed that’s exactly what these guys were chucking at each other.

One guy was starting to get the upper hand just as we arrived on scene.

As I jumped in to prevent any further assault, it became immediately apparent that the aggressor had no intention of stopping, or listening.

He probably didn’t even realize who I was despite us yelling at him to break it up.

Now, I could have spent a few extra seconds trying to man handle this out of control bundle of testosterone but things immediately took a turn from common scrap to downright dangerous.

Bottles were starting to break and the last thing we needed was to have weapons introduced into the mix.

I took control of the aggressor’s head in manner that would allow me to transition instantly into the restraint or choke if need be… and that’s when things got worse.

There was a hand on my gun.

In tactical or SWAT we deploy with drop holsters which are worn on the leg and which also have lower security. It doesn’t take too much wrestling to get out.

I decided It was about enough playing around and so I applied the choke with full force and this guy went lights out… and fast. 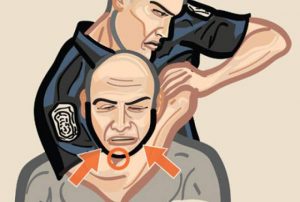 We got him cuffed up and walked him downstairs and outside once he had regained consciousness.

I asked him what he thought he was doing reaching for my gun and his reply almost made me feel kind of bad… almost.

He said that when I had originally taken control of his head that he started to feel light headed instantly and that he was trying to tap my leg to signal that he was willing to comply.

Well… he got a nap instead because there was no way in dynamic situation anyone would be able to tell he was tapping to give up.

This wasn’t some UFC match, it was a full out dust up in the middle of a bar.

He spent the night in the tank at the crow bar hotel and I got home safe.

A short time later we did locate the gang members we were looking for and sent them home for the night as well.

So this is a very effective move that when done correctly, will allow you the opportunity to escape.

You can watch a video of this move which comes with a cheat sheet for easy reference.

Steps To An Effective Choke Out Technique

Your opponent is going to flailing around trying to hit you and pull your hands. To counter this be sure to tuck your head down into the base of his neck.

Also be sure you pull your opponent backwards to keep them off balance and under control.

Within 3-10 seconds your opponent will be lights out. Ease them to the ground and make your escape. 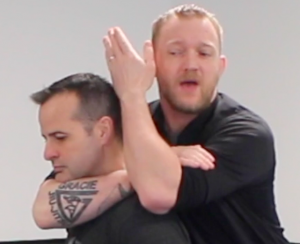 There is also another method that we call the “Locked In” method.

To make that easier for you, I’ve also filmed a quick video that goes over everything we talked about in this article. Plus I want to give you a handy 1-page “cheat sheet” you can print up to make things easy for you.

3 thoughts on “Spec Ops Choke Out Technique Anyone Can Learn”

YouTube Videos
How To Get Abs Fast
Recent Blog Posts