In this modern day and age, it’s nearly impossible to avoid exposure to toxins and chemicals. The air you breathe is thick with vehicle pollution.

The creams you put on your skin are filled with chemical ingredients. The fruits and veggies you eat have been sprayed with pesticides and weed-killing chemicals.

Even your meat may contain hormones. Everything around you—from house cleaning products to beauty products to food to your environment—is contaminated to a certain degree.

In order to live a healthy life, it’s vital that you look for ways to reduce chemical and toxin exposure as much as possible. That means identifying the things in your life and environment that could be harmful to your health.

Bisphenol-A, or BPA as it’s better-known, is one of the most common of the chemicals and toxins to which you are exposed. Though it was discovered to be harmful way back in the 1930s, it is still in production and use today. Roughly 75% of the cans in the U.S. contain a coating of BPA, and more than 10 billion pounds of the chemical are produced every year. All this despite the fact that around 1,000 studies have proven it to be dangerous!

You may be wondering, “What the heck is BPA, and how is it dangerous for my health?”

Let’s start off by answering the first question: What is BPA?

BPA is a chemical that is used in the production of plastic products. BPA is added to harden plastic. It’s the chemical that makes those Gatorade bottles, Tupperware containers, and medicine bottles stiff and hard.

Here’s a scary thought: it’s estimated that 90% of people currently have BPA in their bodies. Thanks to the fact that plastics are used for everything from food to beauty to healthcare to home products, we’re all exposed to BPA on a regular basis.

As expected, this is BAD news. Though there is a great deal of debate about just how dangerous BPA is, the truth is that there are very real risks of long-term exposure to the chemical.

The primary danger of BPA exposure is fertility problems. Multiple studies have been conducted into the fertility effects of BPA and found that the chemical mimics the effects of estrogen. This can throw off the internal balance of hormones (estrogen and testosterone must be balanced in both the male and female bodies). In many cases, it can lead to problems with male infertility.

But the effects don’t end there! Here are a few more of the fertility-related dangers of BPA:

Pretty scary stuff, right? Exposure to BPA isn’t just potentially hazardous—it has been proven through a number of medical studies that there ARE very real dangers of high exposure to BPA. Men, women, and even children are at risk of development endocrine problems as a result of BPA, which could lead to not only fertility problems, but also behavioral and cognitive problems (see below).

Vitamin D is one of the “vital amines” your body needs in order to function. It plays a role in bone health, keeps your skin healthy, encourages healthy endocrine function, and the list goes on.

A deficiency of Vitamin D can lead to a wide range of health problems: everything from obesity to multiple sclerosis to cancer to heart disease. Getting enough Vitamin D every day (via sunlight and enriched foods) is vital for your health.

But BPA makes it harder for your body to get enough Vitamin D. Studies have discovered that BPA could reduce blood Vitamin D levels. Together with phthalates (another toxin found in plastic products), BPA may be the primary cause behind Vitamin D deficiency.

Hormone disruptors like BPA can prevent the body from producing the active form of Vitamin D needed for internal function. Much like BPA throws off endocrine and thyroid function, it can stop your body from getting all the necessary Vitamin D. 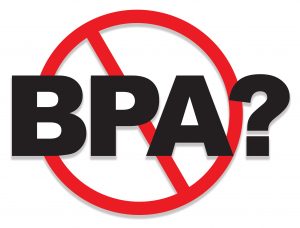 BPA and Your Heart

One 2011 study found a link between BPA and heart disease. Specifically, it discovered that female rats exposed to BPA suffered changes to their natural heart rhythm. The resulting erratic heart rhythms (arrhythmias) increased the rodents’ risk of sudden cardiac death.

Given that cardiovascular disease (a long list, one featuring arrhythmias) is the #1 cause of death in the world today, you can see how serious this is! Exposure to BPA could raise your already surprisingly high risk of heart problems.

One 2013 study found that high levels of urinary BPA were associated with higher instances of pre-diabetes, also known as insulin resistance. Simply put, BPA can mess with your body’s ability to metabolize glucose, which forces your pancreas to produce more insulin to try to control it. Over time, your body becomes resistant to the insulin and thus has to keep producing more, all the while having less and less control over the glucose. If left untreated long enough, it can develop to full-blown diabetes.

BPA’s effects on glucose metabolism can lead to many other health problems. Pancreatic cells may become dysfunctional, obesity may threaten, low-grade inflammation may become widespread through your body, and oxidative stress can lead to reduced cellular function.

BPA and Your Teeth

Remember how BPA affects the levels of Vitamin D? Well, Vitamin D is necessary for the absorption and use of calcium. Low Vitamin D levels have been linked to reduced calcium levels, leading to bone degradation (osteoporosis).

Your teeth are also affected by a lack of calcium and Vitamin D. BPA can also damage the enamel protecting your teeth. A study found that rats exposed to BPA had brittle teeth and reduced enamel protection.

Simply put: BPA damages your teeth inside (reducing calcium) and out (damaging enamel).

In 2013, a study from the Kaiser Foundation Research Institute found that children with higher levels of BPA in their urine had TWICE the risk of obesity. Children with lower BPA levels had a significantly lower chance of being obese than their high-BPA counterparts.

The obesity-related effects of BPA may stem from poor glucose metabolism, or it could be the result of the estrogen-mimicking effects. Remember that estrogen encourages the storage of fat cells, so any chemical that mimics estrogen could have the same fat-increasing consequences.

Other Risks of BPA

The health problems mentioned above are the primary threats of BPA, but don’t think for a minute it ends there. As studies have proven, there are a number of risks that could result from long-term or high BPA exposure:

Some pretty serious side effects, aren’t they? All the more reason for you to avoid exposure to BPA as much as possible!

How Is BPA Still a Thing?

You may be wondering, “If BPA is so harmful, how is it still permitted to be used in all these products (cosmetics, the coating on metal cans, plastic containers, CDs, medical devices, syringes, dental sealants, bottles, and more) that increase our risk of exposure?”

The problem with BPA is that it has two pretty heavy-hitting organizations claiming it’s perfectly safe.

The FDA released a statement in 2014 claiming that BPA was safe so long as it was kept below recommended levels. The statement was released after four years of poring over 300 studies on BPA. They continue to allow BPA to be used in food packaging, containers, and other common household products.

The American Chemistry Council also continues to insist that BPA is safe for human use. It has opposed legislation to ban the chemical on both state and federal levels.

How to Reduce BPA Exposure

Seeing as the government and FDA aren’t going to do anything to stop you from being exposed to BPA, the onus is on YOU to protect your health. Here are a few things you can do to reduce your exposure to this potentially hazardous chemical:

It’s important that you understand the dangers of BPA and how long-term exposure to the chemical can lead to serious health problems. Knowledge is power, so knowing is the first step toward taking action. Make it a point to eliminate plastic products from your life as much as possible, and you’ll have a much lower chance of the above-mentioned health problems that result from exposure to BPA and other chemicals.