Inflammation is the body’s usual physiological response to some form of trauma to your tissue. During a recent nutrition mentorship program, we examined the profound impact inflammation has on your body.

The cause of inflammation may be physical injury, autoimmune issues, bacterial issues, toxicity, blood sugar dysregulation, as well as an overall absence of antioxidants in the body.

When an event occurs, various substances are released by the tissues, which cause changes to the surrounding uninjured tissues.

Some of the tissue products that create the inflammatory reaction include histamine (which increases permeability, causes contraction of smooth muscle, and dilation of the capillary networks), 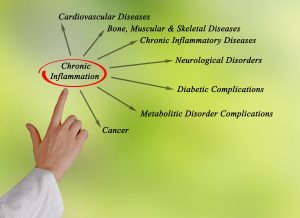 These substances are the messengers of the inflammation process and thus an avenue for possible nutritional intervention. Collectively, they are called autocoids.

Autocoids are substances released from the cells in response to various stimuli to elicit normal physiological reactions locally.

An imbalance in the synthesis and release of the autocoids contributes significantly to pathological conditions such as inflammation, allergies, hypersensitivity, and ischemia-reperfusion.

How’s that for the science… is your brain mush yet?

Look, failing to control inflammation can cause a wide range ongoing health issues. Occasionally, however, identifying the source of the problem requires more in-depth analysis.  This might mean a thorough examination of your food intake to a deeper dive via a lab analysis.

Let’s take a quick look at some of the causes of inflammation.

Choose the right foods, and you may be able to reduce your risk of illness. Consistently pick the wrong ones, and you could accelerate the inflammatory disease process.

Foods That Cause Inflammation

As a general rule consistent with recent studies and popular science these foods are considered harmful to our health. Chronic Inflammation leads to a wide range of metabolic dysfunction which manifests in certain diseases such as Type 2 diabetes and Heart disease.

These types of foods also tend to be associated with an unhealthy energy balance leading to weight gain which in and of itself is a risk factor for inflammation.

There are several studies, even after researchers took obesity into account, the link between foods and inflammation remained, which suggests weight gain isn’t the primary factor. These studies indicate the food itself, or components of the foods can impact inflammatory responses independent of weight gain.

Fruits and vegetables such as blueberries, apples, and leafy greens that are high in natural antioxidants and polyphenols (protective compounds found in plants) are excellent choices.

Studies also have associated nuts with reduced markers of inflammation and a lower risk of cardiovascular disease and diabetes. 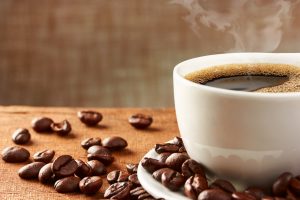 Coffee, which contains polyphenols and other anti-inflammatory compounds, may protect against inflammation, as well.

Listen, it shouldn’t be any surprise that your goal should be an overall healthy diet if you hope to reduce levels of inflammation.

If you’re looking for an eating plan that closely follows the tenets of anti-inflammatory eating, consider The Flat Belly Fix program which concentrates on healthy vegetables and fats with a particular morning tea specifically designed to reduce inflammation through vital metabolic processes.

You can easily control the potential negative impact your eating may have in terms of your ability to naturally combat inflammation. It simply requires a desire to take a new and effective approach.

Hating the Quarantine? This should help you  feel better.  We’re settling in for the long haul with this pandemic, locking ourselves indoors in order to protect our families and loved ones. But, as with any type of social isolation, it’s normal to feel what experts call the “third quarter phenomenon”. Third Quarter Phenomenon is something read more →

Are you a Leader with NO Title? Good Leadership Explained

Are you a leader with no title or can you be a leader when you aren't the boss? Good leadership is constantly demonstrated from any position on a team or in a workplace. When we think of leadership, most of us immediately imagine ourselves leading from a position of power and authority.  The leader of read more →

Stay Safe and Sane During A Crisis

That happened fast didn't it? There’s no denying it: the world is in crisis right now! Companies are closing their doors (temporarily) and laying off employees (some permanently). Commerce has ground to a halt, and nearly every country is going into lockdown mode as we try to fight off this widespread viral infection. Right now, read more →

Speak with confidence and others will follow. Although I had plenty of situations that required public speaking, it always gave me a slight pause. It wasn't something that came completely naturally. As a leader, you’ll often be in a position where you have to speak with others. Maybe as the head of your team, you’ll read more →
CONNECT WITH US
MENU