The modern health and fitness industry attacks sugar in every possible way it can.

Some of the reasons for the attack are found in legitimate science, but others have no place in a conversation about how human metabolism truly functions.

I want the primary focus of this article to focus on the often perpetuated myth that “sugar depletes nutrients in the body” – but first, I think it’s really important to address what I know you’re already thinking…Insulin resistance.

SUGAR AND HOW INSULIN RESISTANCE OCCURS IN THE BODY

An important note to make on insulin sensitivity and insulin resistance is that it’s not a carbohydrate exclusive event.

Yes, they are both important bio-markers for health and body composition and the way in which you structure your nutrient timing can either optimize their metabolic effects or not, but, the examples I always hear regarding the relationship only include carbohydrates.

“You eat too many carbs and you’re insulin resistant”

Or “If you only eat X amount of carbs you will become more insulin sensitive”.

Perhaps this oversimplification is due to carbohydrates effect on insulin levels, but it’s also missing the big picture in what creates these metabolic states.

Somebody can create insulin resistance on minimal carbohydrates from eating in a hypercaloric state for too long of a time.

Whether it’s from sugar, protein, or fat – an overweight individual is going to gradually lose his/ her insulin sensitivity simply by being overweight. Making it a totally viable process with or without carbohydrates. 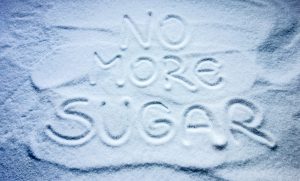 Likewise, as you progressively lean down and become more insulin sensitive you will be at a much lower overall body fat percentage and it is being in this state that creates a heightened insulin sensitivity response, not because you cut out/lowered carbohydrates.

This makes even more sense when you think about the processes of metabolism in body weight regulation. Insulin resistance is a state in where the liver/muscles/fat cells are denying absorption, clearly the body trying to stop additional weight gain because you are already overweight.

Whereas in insulin sensitivity, the body’s anabolic processes are heightened to where any and all weight gain is the primary goal to ensure future survival.

Long story short, insulin resistance and/or insulin sensitivity are both a consequence of energy balance and not carbohydrate intake.

It’s not carbohydrate’s fault, it’s merely a scenario of consuming too much food in any form.

Now back to our regularly scheduled programming with the insulin resistance rant out of the way.

This myth about nutrient depletion is probably the most popular about sugar – your local supplement store employee will likely tell you that sugar depletes the body of B-vitamins, magnesium, and calcium.

They will also usually use emotionally triggering terms like how sugar ROBS nutrients from the body which TEARS DOWN your bone tissue.

Although that sounds scary, it’s unfounded. First off, I haven’t been able to find a single scientific or medical report to support this claim. Literally not even one, so my skepticism was deservedly high at this point.

What seems to have happened is some anti-sugar cult leaders have taken a basic fact surrounding human metabolism and twisted it in a silly way.

But, using the exact same argument, we could select another group of foods that are deficient in one or more of nutrients required for metabolism and make the exact same claims – even if these were “clean” foods.

In fact, using the exact same argument they are using against sugar you could make the same claims about apples, spinach, and brown rice because those three foods (among many others) do not contain relevant amounts of all the nutrients required for human metabolism.

Sounds like a bit of a self-defeating argument to me where the person saying such things didn’t think much of it beyond “Hey, that sounds like it makes sense so I’ll believe it”

YOU’RE NOT A DUMB PERSON

Fortunately, since we aren’t complete idiots, we have more available options for us to eat on a daily basis than just pure sugar and flour.

We have no risk of being in a mono-diet, and the good news is that as soon as you start eating a variety of foods you won’t be put at risk of a deficiency even if you include some sugars and white flours.

So, there is literally no risk here.

The micronutrients that anti-sugar cult leaders like to focus on most surrounding this myth are:

As it turns out, the very best sources for all of your B-Vitamins are animal foods such as fish, beef, lamb, pork, and eggs.

Legumes, nuts, and seeds also have moderate amounts of many B-Vitamins, but, only animal sources contain B12.

Therefore, using their argument once again, the only foods in existence that don’t “rob” your body of B-Vitamins are meat and eggs. Anything else will “tear down” your bones!

Of course I’m being a little silly with this statement, but my point is that indicting sugar and flour because they don’t contain B-Vitamins is one of the weakest arguments for nutrition I have ever heard.

Most plant foods are lousy sources of B-Vitamins – so does that now make plant foods bad for us? Of course not.

“But Dan, you didn’t mention the calcium and magnesium – aren’t those still being depleted?”

This one is a little trickier, not because sugar is bad, but it’s hard to find a good source for these anywhere in our diets.

Although many lists of good food sources for nutrient density include things like leafy greens, legumes, nuts, seeds, and whole grains – all of these things contain “anti-nutrients” that reduce and/or complete block absorption (oxalates and phytates in most cases).

So, the most reliable sources of these nutrients in our diet are very few in number.

Magnesium is quite rich in avocados, potatoes, and bananas – and calcium is best found in dairy products and bones.

What’s super funny and ironic here is that cane molasses is a great source for both of these minerals.

So if you’re concerned about sugar depleting your nutrients, perhaps a spoonful of sugar will solve your problems.

To wrap this one up, the whole “sugar depletes your nutrients” is an argument that is only perpetuated by the “sugar is evil” crowd who are also seemingly allergic to looking at scientific evidence.

Eating white sugar or white flour does not “rob” the body of nutrients.

All food that enters your body requires nutrients for metabolization, so you can make this argument about anything you eat that doesn’t contain every single nutrient known to man (which no food has). No food is healthy or unhealthy – only diets can be healthy or unhealthy.

White sugar or white flour are never a problem so long as they are eaten in the context of a diet that contains a variety of healthy foods.

So, do some deep breathing and have some cane molasses – it’s good for you

Dan is an internationally renowned Nutrition Coach and Strength and Conditioning coach with one of the leading health podcasts in the industry called The Garner Report. Dan is also the author of the best selling book Eat Sleep Burn which outlines the truth behind fat loss.

Stay Safe and Sane During A Crisis

That happened fast didn't it? There’s no denying it: the world is in crisis right now! Companies are closing their doors (temporarily) and laying off employees (some permanently). Commerce has ground to a halt, and nearly every country is going into lockdown mode as we try to fight off this widespread viral infection. Right now, read more →

Speak with confidence and others will follow. Although I had plenty of situations that required public speaking, it always gave me a slight pause. It wasn't something that came completely naturally. As a leader, you’ll often be in a position where you have to speak with others. Maybe as the head of your team, you’ll read more →

Productivity is an essential part of being successful. Being a hardworking, productive person is very likely a huge part of what put you on your current leadership track. After all, it’s reasonable to believe your bosses saw everything you did and believed that you were capable of doing more.  I recall one of the Chiefs read more →

Egos – The Bigger They Are The Harder They Fall

Egos: you just can’t avoid them! If you have managed to avoid wildly bloated egos in the workplace you are a Unicorn. Working with special operations units to life in the private sector AND even my own... working with egotistical maniacal leadership is like managing a mine field. The difference is your insight into both read more →
CONNECT WITH US
MENU