Human Growth Hormone or HGH or even GH is an impressive metabolic agent in the body with a variety of functions from fat loss to building lean muscle.
How do you go about maximizing the presence of this hormone within your body, and gain the many advantages it can produce.

HGH functions are similar to testosterone. As an anabolic agent, it is responsible for stimulating muscle growth, enhancing recovery and increasing utilization of body fat as fuel.
Two, in particular, are among the most common theories discussed. 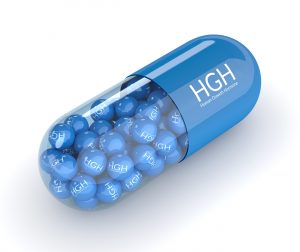 The first theory, referred to as the somatomedin theory, states that once the pituitary gland releases HGH, it then travels to the liver and other tissues where it stimulates the synthesis and release of insulin-like growth factors (IGFs).  Somatomedins are produced, predominantly by the liver, when growth hormones act on the target tissue.

These newly created IGFs then function to stimulate the endocrine system, therefore facilitating the outcomes associated with growth hormone.

The second common hypothesis is known as the Dual Effector theory, which states that HGH on its own can create anabolic effects on body tissues without the assistance of IGFs.

Both of these theories are interesting but don’t lend themselves to a practical application concerning improving HGH production in your body.

What we know for sure is that the development of lean mass is a multi-factorial process. This means adaptions occur as a result of training modality, hormonal response and immune/inflammatory factors.

Production of HGH is at its peak when we are younger. As with many processes that decline in efficiency as we age, the output of HGH is no exception. What is exciting is that we can manipulate the process naturally, because we know we can influence our bodies’ production of HGH.

As I have previously written, various factors that impact the body’s production of  HGH include overall health, diet, activity level, weight training, sleep patterns, consumption of alcohol, prescription drugs and the use of illicit drugs.

Perhaps the most beneficial of the multi-factorial influences on HGH production is the use of weights to stimulate production. In particular, substantial loads and the manner in which you move the weight can have a massive impact on your HGH levels.

Everyone knows the creation of muscle is the body’s response to a stimulus. This means your body adapts to the stress you put it under. When you place it under stress in the form of moving weight, your body breaks down tissue and undergoes the process of repairing the tissue to making you bigger and stronger in that process. The next time you go to move heavy weight your body wants to make sure it has adequately prepared.

Muscle growth is mostly an ongoing process of stress and recovery. Over time, as you expose your body to stressors such as heavier weights, more reps etc., the body continues to adapt, which is also known as the SAID principle, which stands for specific adaptation to imposed demands.

Let’s take increasing HGH levels out of the classroom and into the gym. This is where we take theoretical into the world of practical application through specific programs like Tactical Muscle, where we use some of the most cutting-edge science to increase HGH.

Specifically, we alter the manner in which you move the weight. I still see so many guys at the gym haphazardly pushing the weights with no mental connection to what they are doing or why.

If you are only training with light weights and putting minimal stress on the body, it requires no real recovery response because you are not pushing beyond what is necessary to stimulate growth processes.  With light weights, only moved without paying proper attention to timing and set/rep schemes, your body has no reason to create metabolic responses such as increasing HGH.

When you introduce heavier loading and change the amount of time under tension, suddenly the body’s reaction is entirely different. Lifting heavy weights will create a strong hormonal response. A specific response begins in the pituitary gland which responds by producing more growth hormone.

One of the most critical keys to producing additional growth hormone in your body is adding in a day or two of heavier weights but paying particular attention to the eccentric portion of the lift.

This was demonstrated in a Brazilian study titled: 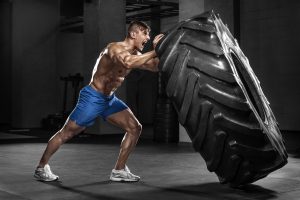 The scientists recorded lactic acid and HGH in all 16 of the lifters before the workout and then continued to monitor the levels of those chemicals for half an hour after the workout.

Both lactate and HGH levels were higher in the men who took 3 seconds to lower the weight, but 15 minutes after the workout, the GH of the eccentric lifters was an incredible  (pumps fist with excitement)… 17 times higher than that of the lifters who pushed the weight quickly. The way we still see guys doing it!

The ability for heavy weight lifting to drive hormonal responses such has HGH has been well documented by researchers. In another study conducted in 2008, researchers regularly measured hormonal levels in the blood of an elite, record-holding male weightlifter over a period of several weeks. The results showed his serum hormone levels spiked considerably as his training peaked. However, you don’t need to be an experienced powerlifter to get the benefits from using heavy weights.

To boost your natural production of human growth hormone, you need to lift heavy weights with proper set/rep schemes that I have laid out in Tactical Muscle.  You will prime your body to increase your HGH levels naturally and improve both your strength and muscle size in the process.

One thought on “Is HGH really the Holy Grail Hormone?”

YouTube Videos
How To Get Abs Fast
Recent Blog Posts